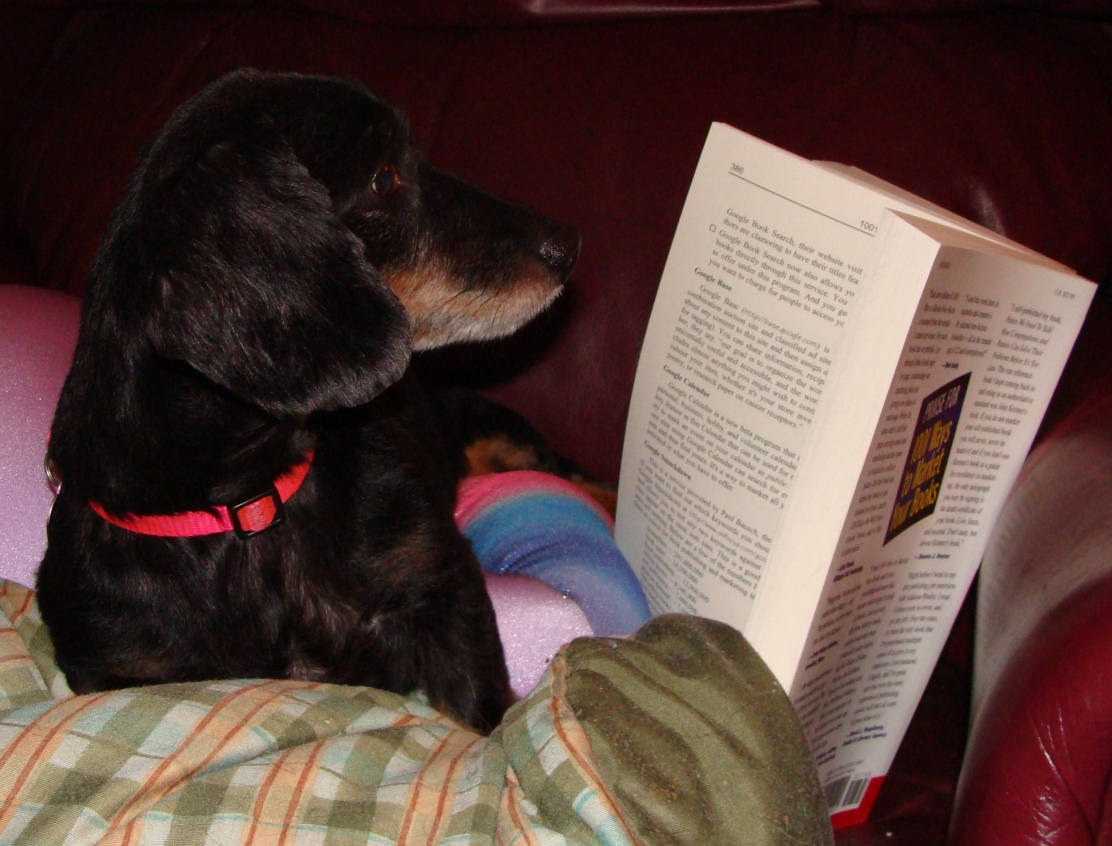 Gryphon points out that the title of this post is incorrect ~ it is Our new puppy and not just mine. Actually, no one asked me if I wanted a new puppy and if they had, I would have answered very quickly, “NO!” Gryphon and I had things very well and didn’t really need a new puppy. After all, all I had to do was look at my Papa and he was starting to know what it was that I wanted. It’s taken quite a few years, but I finally have him trained the way I want him, and they want to ruin that by bringing in another dog?

It was my Mama that made the decision and she kept trying to talk to me about it, but I put my paws in my ears and said, “La-la-la-la-la-la”, so I couldn’t hear. Gryphon listened and told me about it later, but she just kind of shrugged and accepted that we were getting a new puppy.

Now, just so you dont’ think I am anti-puppy, you need to know that Gryphon and I have had some bad experiences with puppies. We can go back years to my Mama’s grandparents and their dog Coco, who when she was a puppy broke her leg, so that when Gryphon and I met her, she was very excited running all over the place, jumping up and down and whacking us with that stupid bright pink cast on her leg. She was at least a small dog and did settle down in later years. Then Coco ran off one day, so Grandpa replaced her with Nickel, a min-pin who would not leave us alone. I had to tackle his legs one day because he was running poor Gryphon ragged, and if anyone is going to do that, it is going to be me.

Then we had a string a much bigger dogs, starting with our cousin Harley, who is a black lab. By the time we met Harley, she was huge, but still a puppy and thought that I was a squeak toy. I mean really! Do I look like a squeak toy? Harley also wouldn’t leave Gryphon alone. It was like she wanted Gryphon to be her mother or something, and Gryphon just wanted to be able to walk on the ground without having a head that was bigger than she is lifting her up from the back end. Then they added Max, a one year old (at the time) German Shepherd, so we really couldn’t explore their home and check it for marauder’s. Then, the final cap to it all was that our Papa’s parents (GrandMuttMa & GrandPupPa) got a new pup (Daisy) and she is bigger and overly volatile and excitable.

So, that is why, when saying the word puppy, I didn’t want to hear anything about it. Papa and Mama even took us out to meet the new pup before we brought her home. I stood there and ignored her, even though she kept trying to follow me around. I thought that if they saw that I wasn’t interested they’d give up on the idea. Oh well, it was a good try. We picked Elsa up a couple weeks later, and the first day she was a very calm little thing.

I didn’t let that lull me into a false sense of security though. I kept ignoring her the best I possibly could, and so did Gryphon. Mama kept telling Papa to give it some time, that we would warm up to this little bundle of fur. Elsa quickly became much more playful and Gryphon ran away from her, because she thought that she might hurt the little thing if she played with her. (And Gryphon loves to play) After a couple days of that, Gryphon finally did play with her and they have been wrestling ever since.

I maintained my dignity and still ignored the little whippersnapper, because she kept taking my place and was horning in on my belly rub time. But, I finally decided that since she was here to stay that I should get acquainted and tell her where her place was. . . at the bottom of the pecking order.

Elsa is actually a smart little pup, and is sweet, just a little excitable and rambunctious. She is learning to behave, but still sometimes gets into trouble. I even wrestle with her sometimes, just to make her smile. She is getting to be very lovable. The picture posted is from the day we brought her home. (Mama has been slow to take updated photos ~ she says Elsa doesn’t sit still long enough and she shows up in the pics as a blur.)

Anyway, she may have something to say every now and then. Until my next post. Paws Up!

Here’s information about my Mama’s stuff:
Visit us at Griffie World
To buy Misfit McCabe, visit my store at Lulu.com or purchase at Amazon.com
To track Misfit McCabe across the country, visit:
Where in the World is Misfit McCabe?
Own a Kindle? Download Misfit McCabe in an instant.
For other ebook formats, visit Smashwords.com
To read book reviews by LK Griffie, visit: The Lulu Book Review