One of the features to the Timmy and the Golden Lion Tamarin series is the guardian angel animal. We are using endangered animals throughout the series, to bring awareness to the animals themselves. The quest for the Madushan Monster is ongoing along the Red River in Yunnan province, southeastern China. What is the Madushan Monster? 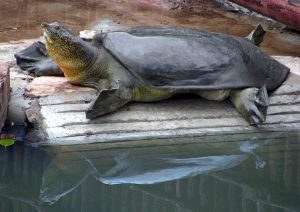 The Madushan Monster is actually a Chinese Giant Softshell Turtle and the death of Lonesome George, the sole Pinta Island Giant Tortoise, the Chinese Giant Softshell Turtle is the most endangered of all turtles. There are 3 known turtles left. Two in the Suzhou Zoo, that are 90 and 110-years-old, and a solitary (probably) male in a Vietnam reservoir. The zoo has made several attempts to have their turtles procreate, but due to some damage to the male, they have not been successful.

But then rumors from fishermen arose about the possibility of two turtles living in the Madushan reservoir, so hope remains, though faint, that the turtles can be found and saved from extinction. The search for the turtles has been likened to searching for the Loch Ness Monster (a link to another of my projects: Homeless Myths series aka The Star Warriors) And the hunt continues.

2 Comments on “The Madushan Monster”