Just in case you think that Scotland, with the Loch Ness, has a lock on aquatic monster sightings, it simply isn’t so. Ireland boasts its share of sightings as well. One of the earliest sightings, dubbed the mystery of County Clare, occurred in 1850 where the beast was described as “sunning itself near the Clare coast off Kilkee.” Does a sea monster need to sun itself?? 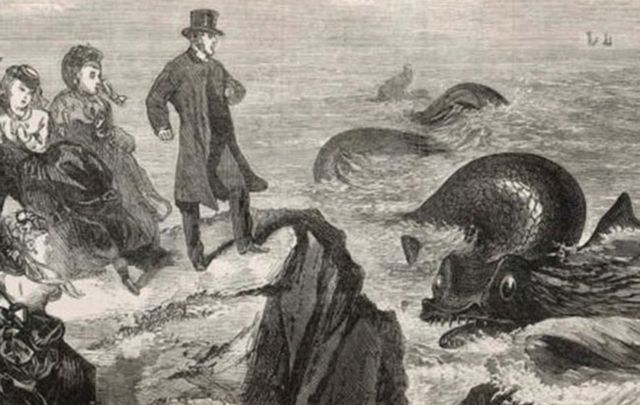 Then in 1871, the most famous sighting occurred … several ladies and gentlemen staying in Kilkee were out walking around the Diamond Rocks, when a monster rose from the surface of the water. What struck me about this account is most sightings are either by an individual or a couple of people, where this sighting occurred in front of a larger group. The news of the sighting traveled from Ireland to London’s illustrated paper the Day’s Doings and posted this description along with the image shown here.

“It had an enormous head, shaped somewhat like a horse, while behind the head and on the neck was a huge mane of seaweed-looking water; the eyes were large and glaring, and, by the appearance of the water behind, a vast body seemed to be beneath the waves.” 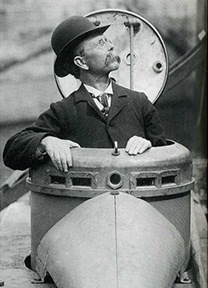 Ahhh, now that sounds more like a description of a water kelpie, but as kelpies are reputed to be shape shifters, they can take any form, including human. So the question arises, for those debunkers out there: Was this a mass hysteria sighting or another instance of a really big fish? Or is it possible that there are creatures of the deep that we have no idea about?

Anyway, I happened to run across this little nugget of information. In 1881, in County Clare, John Philip Holland was the first person to successfully launch a submarine. It makes me wonder whether John Philip Holland had a secret desire to be a monster hunter. After the sighting in 1871, did he throw himself into the job of creating a vessel that would allow him to chase the Irish Nessie underwater? His first submarine designs weren’t submitted until 1875 … it is fun to speculate.

Speculation, wonder, dreaming, and nightmares are all fuel to the writer’s fire.