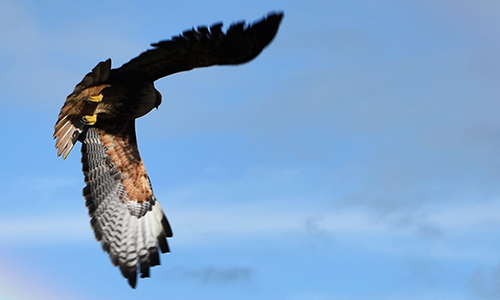 When I see a hawk soaring in the sky, a wistful feeling washes over me as I think about how free it looks gliding overhead. Free from Earthly obligations, charting its own course, with the appearance of no worries. How wonderful would it be to soar like a hawk? Except all of that freedom I imbue to the hawk may not actually be true. Yes, it charts its own course, but there are factors I don’t have to contend with driving the motivation of its course. Because when a hawk is gliding, circling overhead, it is probably looking for prey.

The hawk is a hunter — and my survival does not depend on my ability to hunt for sustenance. If I am running low on food, I have a multitude of choices on how to fulfill that basic need … I can go to the store, order online and have stores bring the food to me, or in a pinch, even go to a drive-thru. So when you think about it, the “freedom” of the hawk includes the stress of finding their next meal. I live in a largely urban area, so while prey exists, it is in much shorter supply.

The writing journey for Speak No Evil was an incredible experience and I feel blessed to have been gifted the story by my character, Melody. Her love of nature and how it was fostered by her father by hiking through the mountains is one of those blessings. It reconnected me in a way I have difficulty articulating to my early years. While definitely a city dweller now, the same area in my childhood was chunks of paved roads, but surrounded by orange groves, dirt roads, farms, and small lakes and rivers. 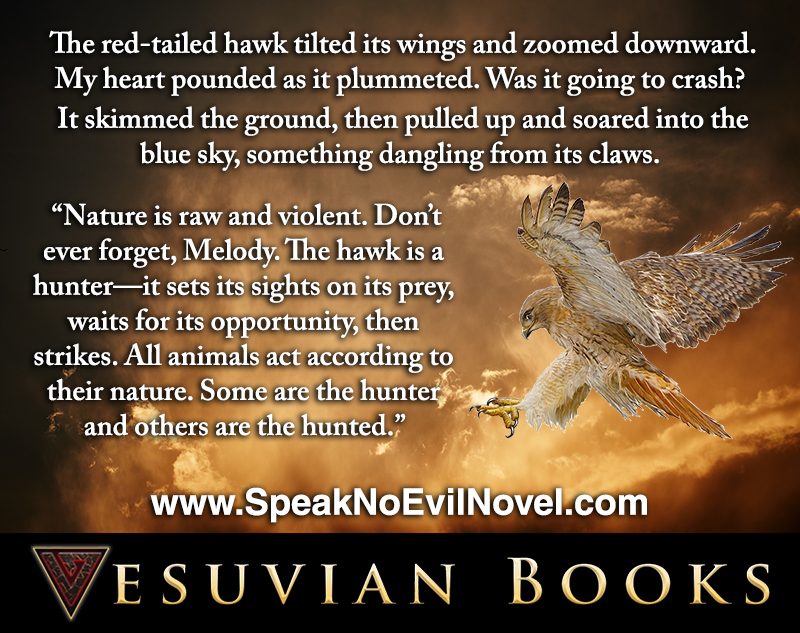 The times Melody spent with her father were so precious to me, as they were to her, especially because they were suddenly ripped away. While in the mountains on a snake hunt, Melody’s father pointed out the hawk circling above.

The red-tailed hawk tilted its wings and zoomed downward. My heart pounded as it plummeted. Was it going to crash?
It skimmed the ground, then pulled up and soared into the blue sky, something dangling from its claws.
“Nature is raw and violent. Don’t ever forget, Melody. The hawk is a hunter—it sets its sights on its prey, waits for its opportunity, then strikes. All animals act according to their nature. Some are the hunter and others are the hunted.”

This moment sets up a bit of foreshadowing for the novel. But for me, this also shows that rather than protect Melody from the raw and violent side of nature, her father wants to teach her that the violence exists so she is better prepared to deal with it.