October is a month that evokes all things spooky … spiders and spider webs, witches, ghouls, ghosts, monsters, and there is always a black cat somewhere. Somehow, after being revered in ancient Egypt (3000 BC or thereabouts), the rise of witchcraft in Europe made the black cat suspect. During the fourteenth century, the Black Death was put down to black cats, and they were all but killed off — when in reality, killing the cats made things worse as they could have been killing the rodents spreading the disease. There’s irony for you. 😉

Back to witchcraft … those presumed to be witches often had taken in stray cats to be their companion and somehow the idea of “companion” turned into the witches “familiar” and the belief that the witch could turn herself into a (usually) black cat. Even modern literature supports this in the character of Professor McGonagall, who has the ability to transform herself into a black cat in the Harry Potter series.

In the original draft of The Journal of Angela Ashby, there wasn’t a cat on the page. The cat came out of a discussion with my agent, Italia Gandolfo, along the road to publication. I’m a fairly lean writer, and she wanted a longer book … her advice? Put in a cat. I thought about it for a few moments and realized how perfect a cat would be for the story. 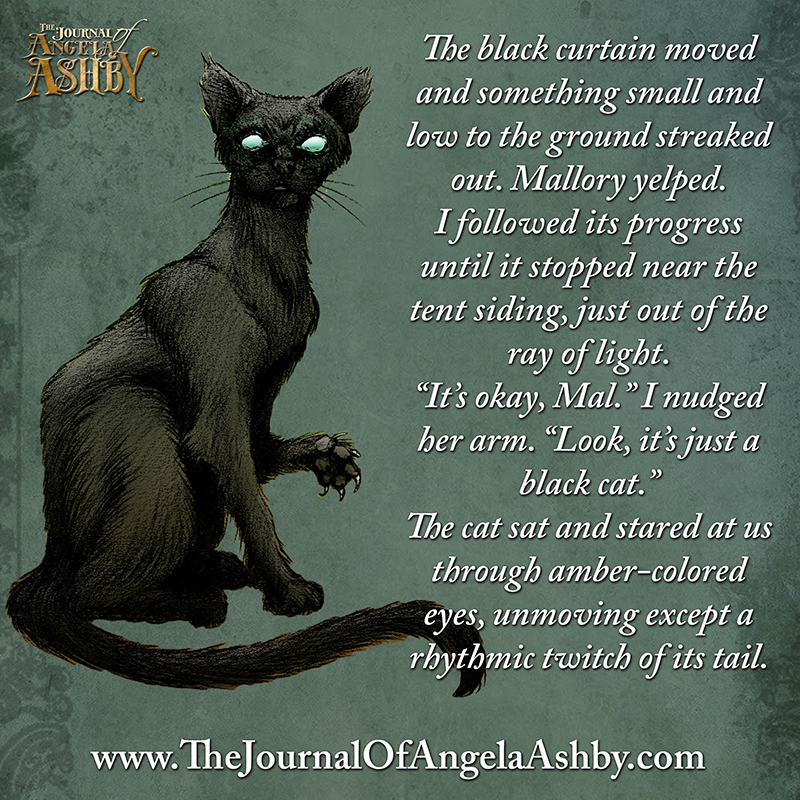 With the mysterious fortune-teller, Madame Vadoma, I thought the inside of the tent where Angela and Mallory had their fortunes told was the perfect setting to introduce a cat. I honestly had no idea how much the cat was going to slink through the story, but she did. In deciding on what type of cat, we picked the Bombay cat as being the perfect style … and it is usually the kind of cat you see in Halloween decorations that pop up everywhere in October. Once the cat, Malachite, had been introduced, she became a full-blown character, and somewhat of a conscience for Angela. By the time I was done weaving the cat through the book, I couldn’t imagine the story without it anymore.

The black curtain moved and something small and low to the ground streaked out. Mallory yelped.
I followed its progress until it stopped near the tent siding, just out of the ray of light.
“It’s okay, Mal.” I nudged her arm. “Look, it’s just a black cat.”
The cat sat and stared at us through amber-colored eyes, unmoving except a rhythmic twitch of its tail.

If you would like to subscribe to receive a notification about blog posts OR signup for my newsletter, please do so below: