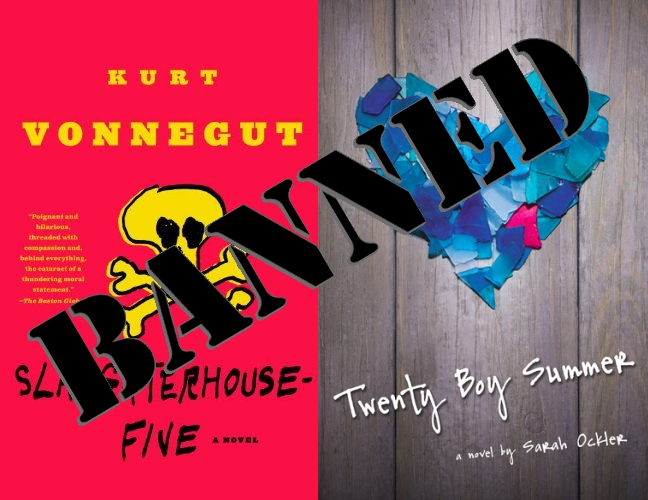 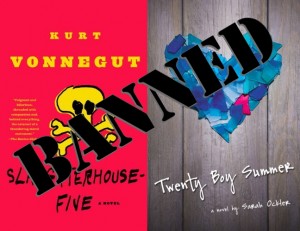 The world is an insane place. That is the only explanation I can come up with. Back in September 2010, a man by the name of Wesley Scroggins stirred up the people of Republic, MO by asking that Speak by Laurie Halse Anderson, Slaughterhouse-Five by Kurt Vonnegut, and Twenty Boy Summer by Sarah Ockler be banned from the schools. I spoke out about the absurdity of Scroggins crusade at that time, and I’d hoped the people and the school board of Republic, MO would prevail in keeping these books in the schools. Now, nearly a year later, Slaughterhouse-Five and Twenty Boy Summer have been banned (thank goodness they decided to keep Speak). Not only were they banned, but the school board vote to ban was 4-0. Appalling.

It is particularly appalling because of the board members who voted to ban, only ONE had read all three books according to UPI. How can you possibly cast a knowledgeable vote if you haven’t read the material? Did they decide that one person reading the books was sufficient? The vote is said to be about policy and not a criticism of the books in question. “Were not making a judgment call on if the book is good or bad, we just want to make sure it’s age-appropriate,” Duvall said. I find the whole age-appropriate rationale a bit baffling. My understanding is that these books were available in high school, not middle school or elementary.

Slaughterhouse-Five is considered not age-appropriate because it deals with the shocking realities of war — apparently our tender teens just aren’t ready for that. But from seventeen-years-old on, they are eligible to enlist in the military and the military would laugh if you told them it wasn’t age-appropriate to send the tender teens into battle zones. So a year or two prior to being able to experience the front line themselves, it is not appropriate for them to read? Reading about the realities is a form of preparation. By removing the books, you are removing the chance to explore the situations and bloodshed in the safety of written format.

As far as the sex in Twenty Boy Summer, I feel like heads are being buried in the sand. Teens have sex. Not all of them, but some — and they always have. And to deny that it is happening doesn’t change reality. So let’s look at age-appropriateness again. In high school where some teens are having sex, they shouldn’t be able to read about it? Oh and just to be clear, we are talking about a scene and NOT the overall message of the book — which is about grief and how two girls deal with death of a loved one.

Does this mean that we should allow teens to read any and every thing they want? I think it depends on the teen and the family. When I was a teen, the answer to that question for my family would have been yes. That was my family’s decision — they had the right to make it. Wesley Scroggins chooses no — which is well within his rights for his own family. I still have a very hard time with the fact that Scroggins led this charge to remove these books from the school system where his children aren’t in attendance. If his own children were in the public school system in Republic, then I might have a little understanding for a father trying to protect his children. He wasn’t trying to protect his own. He was assuming that all parents in Republic were unable to protect their own children according to his standards… and were I a parent in Republic, MO I’d be angry with his assumption and his actions.

As usual, when wound up about a topic, I become long-winded. I have more to say, but will save it for another post for tomorrow. Please check back and find out more about the insanity of banning books.

2 Comments on “Stop the Insanity – Part I”